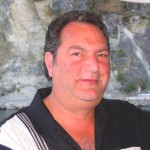 His stories have appeared in newspapers around the country through the New York Times and Hearst Corporation news services.

Gene is a Seattle native who grew up on Mercer Island and graduated in communications and editorial journalism from the University of Washington.

“I started this journey when Little Richard knocked me out of the cradle,” Gene says. “And I continue to be a sucker for a great musical hook.”

Over the years, Gene has interviewed hundreds of musicians, from Eddie Vedder and Courtney Love to James Taylor and Quincy Jones. He was front and center when Seattle’s insular garage-rock scene exploded internationally in the early 1990s.

The week of Kurt Cobain’s death in April 1994 was one of the most intense of his career, with many hours spent working with a team of P-I reporters to piece together the story of Cobain’s life and untimely death.

The late Frank Zappa once said, “Most rock journalism is people who can’t write interviewing people who can’t talk for people who can’t read.” But criticism of music – whether it’s pop, rock, country, blues, R&B, jazz, hip-hop or any other style – attracts many creative minds, dedicated fans and colorful characters.

In an interview with Gene, Dick Clark of “American Bandstand” fame said, “If you’re lucky enough to find a line of work that you like, and you don’t watch the clock while you’re doing it, then you don’t mind when Monday rolls around and you’ve got to go back and do it again.” Amen.

Read Gene’s final story for the print edition of the Seattle Post-Intelligencer.

GeneStout.com is now syndicated to the Seattle Times.