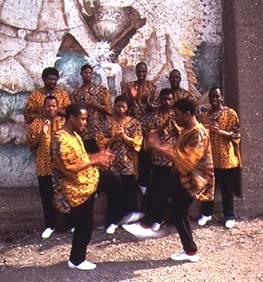 Elvis Presley surely would have loved Ladysmith Black Mambazo — and not because of the group’s habit of greeting applause with the words, “Thank you, thank you very much.”

The gospel-loving Presley would have admired the surround-sound harmonies and call-and-response singing of the Grammy-winning, nine-member, South African vocal group famous for its light a cappella singing and “tip-toe” dancing.

Their singing was gentle and almost birdlike, accented by soft trills. Sweet harmonies fluttered on a light summer breeze, entrancing a capacity crowd at the Zootunes concert on the north meadow. The sound was impeccable.

Dressed in colorful, patterned shirts, black trousers and white shoes, the group projected an air of casual elegance and studiously practiced folk traditions. Adding to the music was the group’s gently choreographed dance moves, which occasionally resembled a kind of vertical break-dancing. On hand to share in the summer magic was a 40-member wedding party from South African, enjoying summer at the opposite side of the globe.

Most Americans whose tastes lean toward world music discovered Ladysmith Black Mambazo when Paul Simon featured them on his landmark 1986 album, “Graceland,” a masterpiece in Simon’s prolific career. The show included the collaborative song, “Homeless,” recorded in the ’80s with Simon.

It has been a remarkable year for Ladysmith Black Mambazo, which won a Grammy for “IIembe: Honoring Shaka Zulu,” a musical tribute to the African warrior of the 1700s.

Divided by a 15-minute intermission, the concert included such songs as “Phalamende,” a song celebrating the demise of apartheid, and “Hey, Hey, Beautiful Girl,” a romantic, playful tune performed with traditional dance steps, including high kicks and sharp turns.

It didn’t take much effort to pursuade concertgoers to climb on stage for a bit of impromptu dancing, adding a touch of mirth to the final moments of the show.

When the group took its bow shortly before 8 p.m., the crowd cheerfully demanded an encore. And, of course, Ladysmith could not have left the stage without its stellar version of “Amazing Grace,” featured on the group’s 2006 album, “Long Walk to Freedom.”