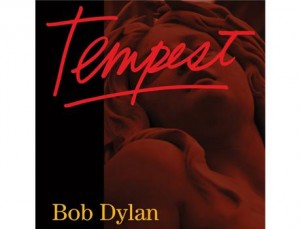 Bob Dylan is marking his 50th anniversary as a recording artist with “Tempest,” a collection of 10 new original songs to be released Sept. 11 on Columbia Records. (He’s also performing Oct. 13 in Seattle; see details below.)

The 71-year-old music icon made his debut as a recording artist with “Bob Dylan” in 1962.

“Tempest,” produced by Jack Frost, is Dylan’s 35th studio album. It follows his platinum-selling 2009 album, “Together Through Life” (Dylan’s first to debut at No. 1 in the U.S., U.K. and five other countries), as well as ”Modern Times“ (a blockbuster that sold more than 2.5 million copies), “Love and Theft” and the Grammy-winning “Time Out of Mind.” (And then there was that curious holiday,” Christmas in the Heart,” released in 2009.)

Will the new album live up to Dylan’s recording achievements of the last 12 years? We’ll find out when “Tempest” makes its debut in September.

In May, the elder statesman of folk rock was the recipient of the Presidential Medal of Freedom, the country’s top civilian honor.

“There is not a bigger giant in the history of American music,” President Obama said at the ceremony. “All these years later, he’s still chasing that sound, still searching for a little bit of truth. And I have to say that I am a really big fan.”

In 2008, he was awarded a Pulitzer Prize for his “profound impact on popular music and American culture, marked by lyrical compositions of extraordinary poetic power.”

“Tempest” can be pre-ordered on iTunes and Amazon.

Songs will include “Duquesne Whistle,” “Soon After Midnight,” “Narrow Way,” “Long and Wasted Years,” “Pay in Blood” and “Scarlet Town,” as well as “Early Roman Kings,” “Tin Angel,” “Roll On John” and the title track, “Tempest.”

Find all of Bob Dylan’s albums at his official website.

Dylan is currently on tour and is scheduled to perform with Mark Knopfler Oct. 13 at Key Arena. Tickets go on sale at 10 a.m. July 27. Find a list of his scheduled tour dates here.