After singing “Last Rodeo” Saturday night (May 1) at the Tacoma Dome, Kix Brooks of Brooks & Dunn wiped a tear from his eye.

Was it real or just part of the show? Hard to tell.

The tune was the first of a number of songs performed on an extended stage that jutted into the audience, creating a feeling of intimacy at the large arena. Brooks and his musical partner, Ronnie Dunn, were seated for much of the segment. Occasionally, they were joined by other band members.

“Thanks for coming back to hang with us one last time,” Brooks told the huge crowd.

“And thanks for paying our rent for the last 20 years.”

Brooks was wistful as he told the story of a rodeo cowboy at the end of his riding days, while a nostalgic video of the duo played on the large screen behind him.

After singing “Last Rodeo,” Brooks suggested “The Last Rodeo Tour” may not be the duo’s final road trip.

“This isn’t the ‘Hell Freezes Over’ tour,” he said, referring to the Eagles and hinting at a possible comeback at some point in the future.

Despite the wistful comments, this show was not a sad farewell. Brooks & Dunn spent nearly two hours giving fans what they paid for: a slew of powerful ballads and raucous country rockers from two decades on the charts. 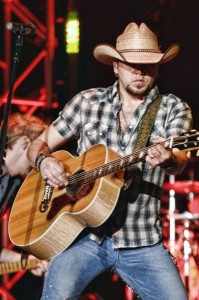 The duo could have just pumped out a 90-minute set of greatest hits, but instead dug out a few old favorites from the archives — “Honky Tonk Truth,” “I’ll Never Forgive My Heart,” “Red Dirt Road” and “Lost and Found” — before the inevitable hit parade.

Over the years, Brooks & Dunn has created a huge catalog of country classics, and they were all on display at the Dome: “Hardworking Man,” “Neon Moon,” “Rock My World (Little Country Girl),” “Only in America” and “My Maria.”

Backing Brooks & Dunn — the most successful duo in country music with more than 30 million in album sales, and winner of dozens of awards — was a nine-member band featuring three background singers.

The stage was what you might expect of a high-powered show such as this: Several giant screens, eye-popping videos, strobe lights, amazing graphics, a steer skull over the stage and a even a huge plume of red, white and blue streamers and four men in uniform for Only in America.” The most unusual prop of all was a mirror ball featuring back-to-back steer heads.

Concertgoers were definitely there to party, saluting a duo that has been part of their lives for 20 years. Some were draining beers as fast as they could buy them. It was as if Prohibition had been scheduled to begin at midnight. So much got spilled that draft beers should have been served in sippy cups.

Tipsy or not, the crowd was on its feet for the first song, “Play Something Country.” Reba McEntire was featured in a video that accompanied “Cowgirls Don’t Cry,” the duo’s collaborative hit single with McEntire.

Afterward, Dunn recalled playing the Tacoma Dome in 1994 and thinking it was “the biggest place in the world.”

Before launching into “Mama Don’t Get Dressed Up for Nothing,” Brooks grabbed a video camera and began shooting images of concertgoers, setting off a collective cheer. 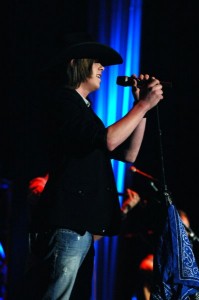 The saucy song “Put a Girl in It” was accompanied by a sexy cartoon video. “You’re Gonna Miss Me When I’m Gone,” “Ain’t Nothing ‘Bout You” and “Working on My Next Broken Heart” were noisy crowd-pleasers. And “Believe” was just plain beautiful.

The show included sets by 16-year-old Tyler Dickerson, a Mississippi-bred singer mature beyond his years. The teen had a great feel for what it takes to be an entertainer on an arena stage, as well as a soulfulness that gave him great presence.

Support act was Jason Aldean, one of country music’s hottest young stars. The Georgia native has been riding the rocketship since his song “Big Green Tractor” became a hit last year.

In fact, Aldean is still marveling over the song’s success. “It was shocking how much one song could change a career,” he told the crowd.

Aldean has been on such a tear that he looked as though he was wearing the same plaid shirt he had on at the Puyallup Fair last September. Read the review here.

Aldean whipped the crowd into a froth with such songs as “Crazy Town,” “Amarillo Sky,” “The Truth” (a painful breakup song) and “She’s Country.”

Aldean finished his set with a wild version of Kid Rock’s “Cowboy” performed with a “talk box” for a robotic vocal effect.