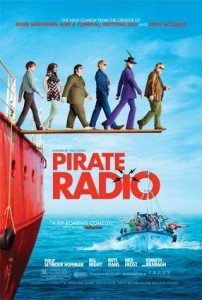 “Pirate Radio” is a lightweight comedy about a boatload of radio renegades broadcasting offshore in the North Sea of England in the mid-’60s — from Richard Curtis, the creator of “Notting Hill” and “Love Actually.”

They lift skirts — and skirt the law — during an era when government-sanctioned public radio refused to play rock ‘n’ roll.

While a government official schemes to sink the ship of radio fools he calls “drug takers, law breakers and bottom-breaking fornicators,” the boys on board thumb their noses at the establishment and play (and say) pretty much whatever they want. In the end, the go down in a Titanic-style disaster.

Philip Seymour Hoffman is great as a Lester Bangs-style rock fan who manages to say the F-word on the air, despite the warnings of the crew’s dapper leader (Bill Nighy). And Rhys Ifans, looking somewhat like Mick Jagger in a purple suit, is intriguing as his on-air rival.

There’s also a shipboard romance — though girlfriends and female visitors are only allowed on weekends — involving Tom Sturridge and Talulah Riley in a boy-gets-girl, boy-loses-girl, boy-gets-girl-back subplot. And Emma Thompson appears as the mother of the boy who gets the girl, revealing the identity of his real father.

Most of the humor and antics in “Pirate Radio” are of the frat-boy variety. But there is one scene that really got to me. The destruction of hundreds of LPs during the flooding of the ship in the film’s final moments. Any lover of old vinyl will cringe as rock’s history literally goes down the drain.

“Pirate Radio” is a watered-down version of the original release in the U.K. about six months ago, and it seems hurried and clumsy. The soundtrack is filled with songs by the Beach Boys, Rolling Stones, The Who and the Kinks — songs that are now classic-rock tunes. It seems odd that they were once regarded as subversive, or a least distasteful, by British officials. But such were the times.

Read a longer review from the New York Times here.